So far so good. But I've had a lot of issues with YouTube lately and it's driving me nuts. The problem is that their guidelines are incredibly vague so it's hard to know what is and isn't allowed in general, but harder still to know what qualifies for an 18+ video. This. Is. Frustrating! What's worse is that there is no way to get support from YouTube and their help articles are worthless. 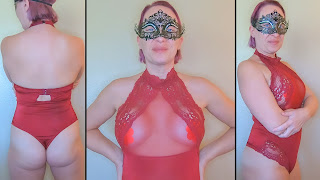 I uploaded a video titled "Bodysuit thoughts and review" where I show off and give my opinions on a new bodysuit I bought. To do that I wear the bodysuit but this bodysuit is a little too much for YouTube so I wear pasties to cover my nipples (because we all know how nipples are so evil). I have no problem with this, this is one of the rules they are clear about and I am happy to follow them.

I came up with that idea by finding other YouTube videos that do what I want to do and using what they did. For example, Bryci is a very popular YouTuber and she gets away with a LOT on YouTube. I mean, A LOT! I figured if they're okay with what she does then my far tamer version should be totally within the rules. After all, I'm not out to break rules or push boundaries, I just want to know how to work properly within the rules when the rules aren't spelled out.

Note that I am NOT in any way upset with what Bryci does on her channel. Quite the opposite, I love it, and that's why I figured she'd be a good example to follow. I don't want to use her images without permission so instead look at Video 1 and Video 2 of hers. Those first seconds that show her are basically the thumbnails she uses.

In Video 1 you can see her exposed nipples in the thumbnail and throughout the video, yet the video is an all ages video (not 18+ restrcited). In Video 2, the thumbnail shows her butt crack as well as her boobs which are covered by pasties. She has dozens more like these and all seem to be allowed and I haven't found any (but didn't check all) that are 18+. Also, Bryci is far from the only example of girls getting away with this, there are zillions.

The photo shown above is the thumbnail I used for my YouTube video. The video itself I set to be 18+, even though it shouldn't have to be. But I like to err on the side of caution and do the right thing. While YouTube is okay with my video, they deleted my thumbnail because it violated guidelines even though they couldn't tell me what the guidelines are, nor can you contact YouTube for support because their support doesn't really exist in any usable format when you're a small timer like me. So replaced it with this... 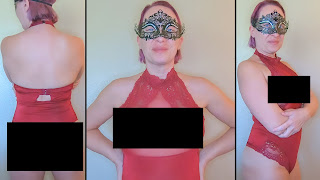 ...which they seem to be fine with. How stupid is this? Why are things okay for some YouTubers and not others? Why aren't the rules more clear? I like following rules but when it's all a guess how am I supposed to do that? If I had 10 million subscribers I bet I could get away with so much more and that seems to be the problem. The bigger you are on YouTube, the more you can get away with and this double standard is just wrong. 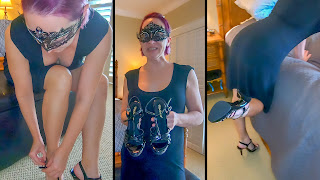 The thumbnail above belongs to my "Quick Review Of Black Strappy High Heels From A Fan" video. It's very tame. I'm in a dress and showing a new pair of shoes a fan sent me. It's literally nothing more. So I left it as an all ages video (aka, not a 18+ video). Within hours of its release some moron reported it and YouTube and YouTube emailed me saying...

As you may know, our Community Guidelines describe which content we allow – and don’t allow – on YouTube. Your video Quick Review Of Black Strappy High Heels From A Fan was flagged to us for review. Upon review, we’ve determined that it may not be suitable for all viewers and it has been placed behind an age restriction.

...and they made it an 18+ video. I appealed their decision and got another email saying...

Thank you for submitting your video appeal to YouTube. After further review, we've determined that while your video does not violate our Community Guidelines, it may not be appropriate for a general audience. We have therefore age-restricted your video.

...so they left it aged restricted which I confirmed in YouTube Studio. Within an hour of that email I noticed my video suddenly went from "18+ Age Restriction" to not being restricted at all. This makes no sense! Somebody reported me, they flagged it as 18+. I appealed and was denied so they kept it at 18+. An hour later it magically went from 18+ to "fine for all ages" even though I NEVER got another email saying they reversed their decision. Why is this? There is no consistency, no clear guidelines or rules in place, and no way to get support from YouTube.

Damn giant tech companies, get your act together already! Most of us aren't out to break the rules or find loopholes, most of us are fine following rules but you're making it impossible to do that.

Popular posts from this blog

A lot of people would like to try it but simply don't or can't. Maybe you're a guy and your partner doesn't like the idea of your dick in their asshole. Tough to blame them when you really think about what you're asking them to do!

I never thought I'd be in a position to help people with a subject like this but maybe I can. This is one of the most common questions I get fro…
Post a Comment
Read more

The Right Fit This is the most important one for us because it's not just about Stefano sticking his dick in the first wet hole that turns up. We want to find a girl we're both into. For us, this likely means somebody who is on the shorter and more petite side of the scale since I'm sort of tiny at 5' 2".

While I'm not skinny, I don't think we're looking for an overly large girl. I'm curvy and another curvy girl would be awesome. As would a more petite girl. We're not super picky on this but a 6 foot tall Amazon woman or a 200 pound 4 footer just isn't for us, eve…
Post a Comment
Read more